We're Not in Kansas Anymore

People from Africa, Asia, and across the North American continent.

Hard to summarize this industry because at this conference, there is no one industry. So the theme is about everything that's changing.

The people who are not paying attention to what's going on in the greater world are stuck in their niches. And there are people why don't give a flying rat's ass about what we do. And sometimes they succeed, get to the finish line before we do.

Social media has created a content revolution. People are enabled with a template to connect to the internet and publish worldwide. People are connected to the world like we've never seen before. We're both the scientist in this experiment and the subjects.

Wireless changes everything. South Korea is the most wired country in the world, with 80 percent of its households connected. The U.S. is not in the top five.

People know: coffeeshops are now synonymous with the Internet.

Netflix video-on-demand supports 837 different mobile device configurations. The technical communication industry's mantra of write once, use everywhere is how they did it.

As devices get smaller, we see fewer page views on the web. The smaller the content on the screen, the more frequent tap errors and accidental activations. Users are more successful when using sites optimized for mobile. Repurposed designs for larger screen sizes work terribly on smaller screens.

20% of all books sold this year are eBooks. Readers prefer to buy eBooks instead of borrow them. Corporate publishing is the new black; eBooks, apps, and the mobile web are the new products.

HTML5 is a specification, not a standard, but it's not supposed to be complete until 2022. But we're not waiting; we have to adopt it now.

Here's a photo of Scott getting ready to present: 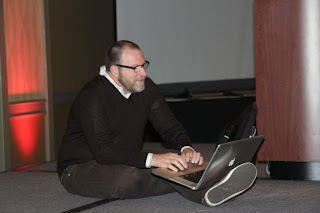